Windows does not allow users to rename files as easily as it should. If you use multiple computers and want to batch renaming your files, this tutorial will show how easy it is to do so. 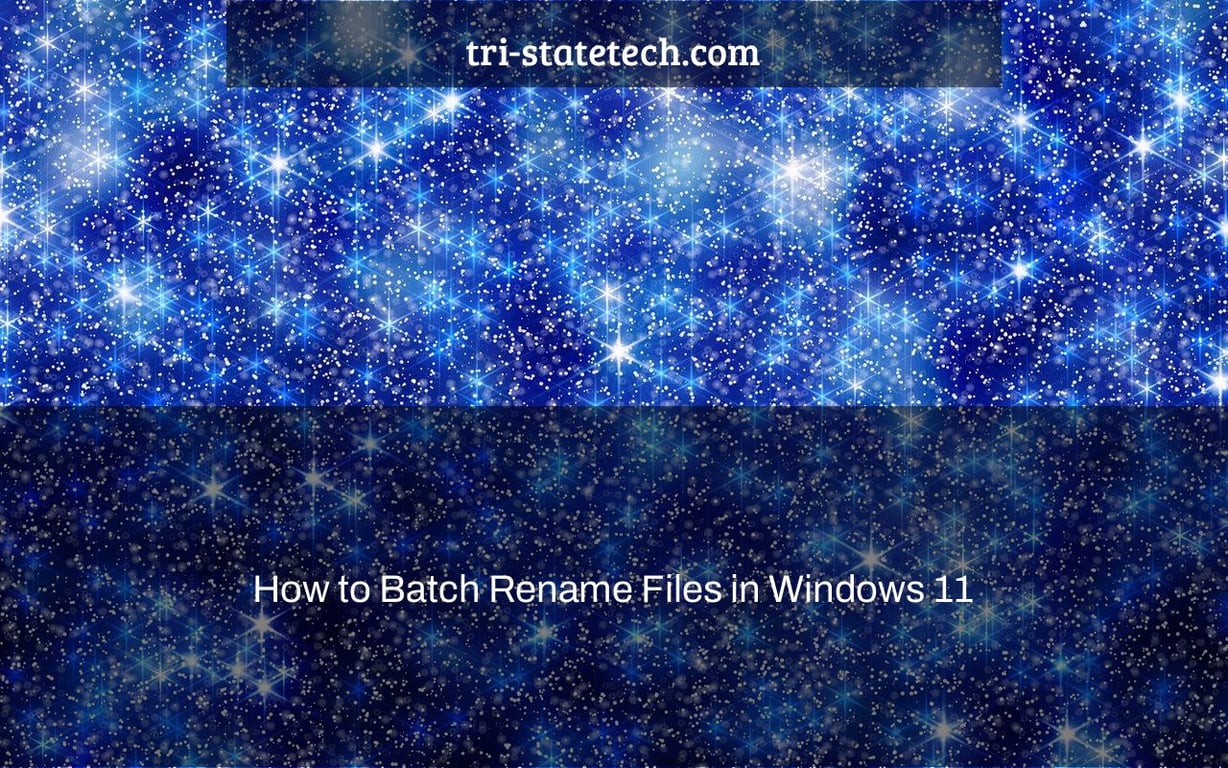 If you need to rename a big number of files on Windows 11, rather than changing them one by one, you may use a sophisticated tool called Microsoft PowerToys to mass rename the files in masse. You’ll be able to do the following using PowerToys: 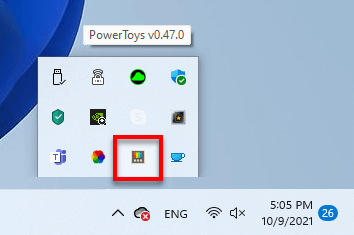 Select PowerRename from the left pane of the PowerToys Settings. Then, to activate the functionality, choose “Enable PowerRename” from the drop-down menu. 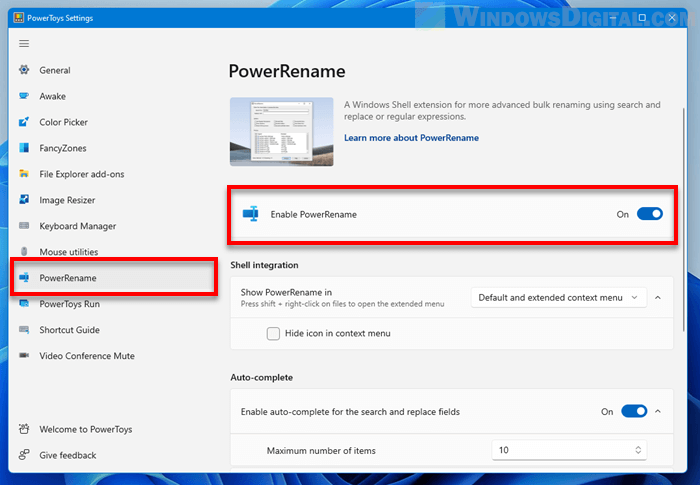 To batch rename several files, right-click all of the files you wish to rename, then choose Show additional choices (Windows 11) > PowerRename. If you have files and subfolders you wish to include, right-click the parent folder (the folder where all the items you want to rename are kept). 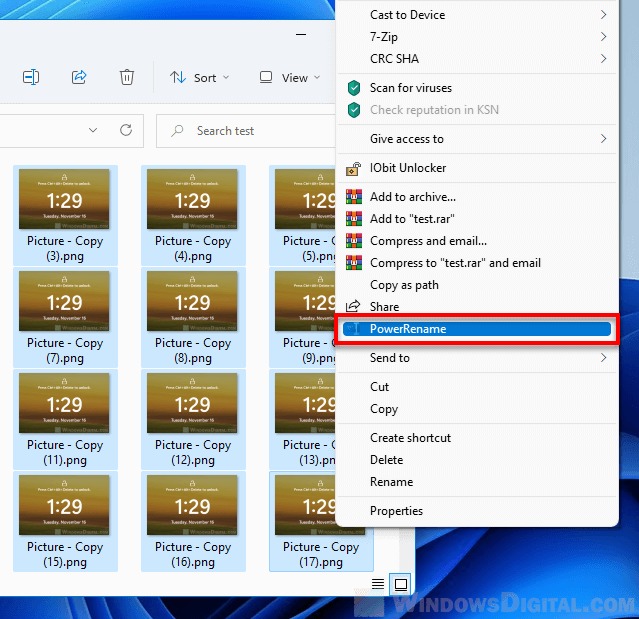 You may utilize the search and replace box, as well as all other available options, in the PowerRename window to rename your files in bulk. You may preview the changes in the Renamed column before clicking Apply. 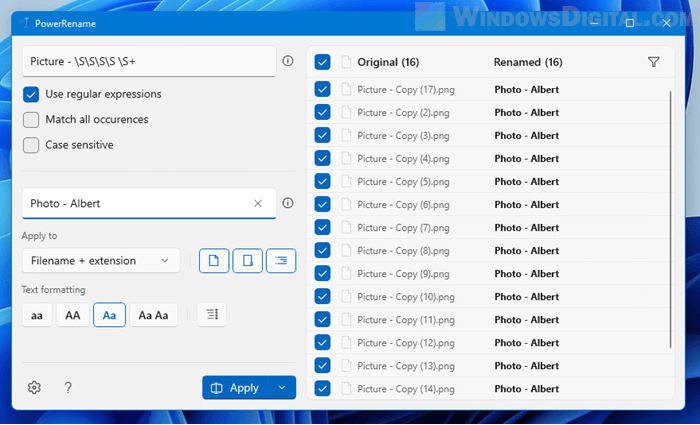 In several files, replace a portion of the filename.

Enter the words you want to search for and the text you want to replace with to replace just part of a filename in files you’ve chosen. In the example below, PowerRename will look for the word “Picture” in the filename and replace it with “Photo” for all of the chosen files. 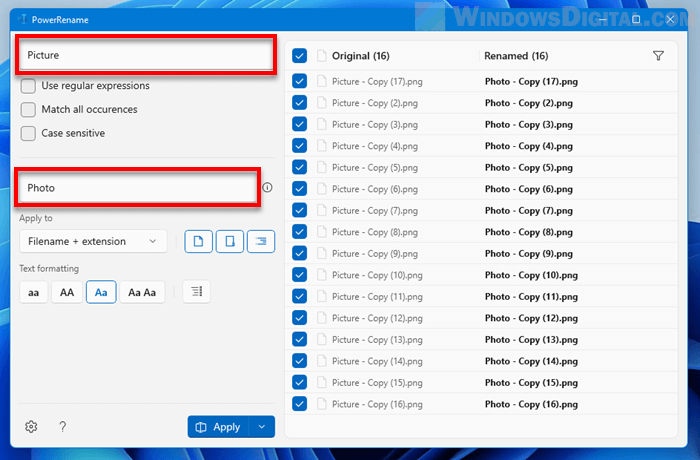 Remove a portion of a file’s name from several files

Enter the words you wish to search for and delete in the “Search for” area, and leave the “Replace with” field empty to remove part of the filename from numerous files. This will replace the text with an empty string, thereby erasing it. 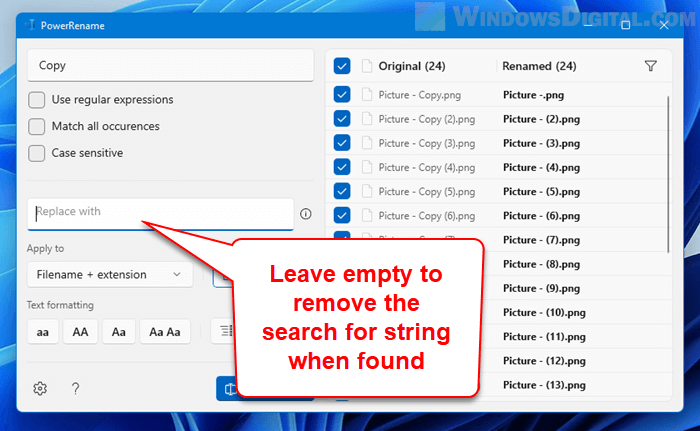 Multiple files with spaces in their names should be removed.

Simply search for the space ” ” and replace it with an empty string to eliminate any white space from the filename. This will delete any spaces present in the filenames of all the files you’ve chosen. 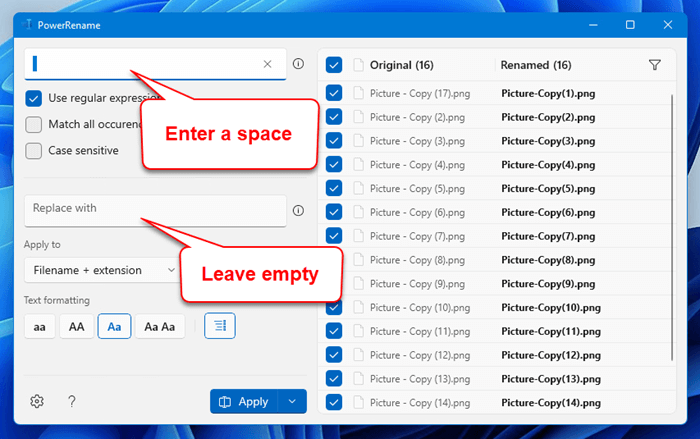 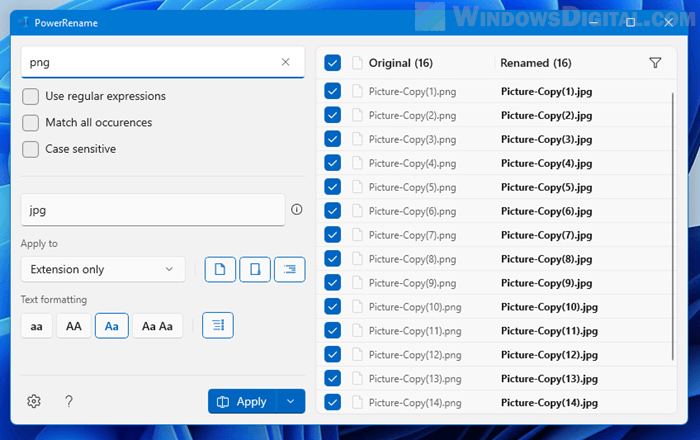 Files should be renamed in a consecutive order.

To rename files successively in Windows 11 using PowerRename, pick the Enumerate items option after selecting all the files you wish to rename sequentially. After that, PowerRename will append a sequential number to the end of each file’s name. 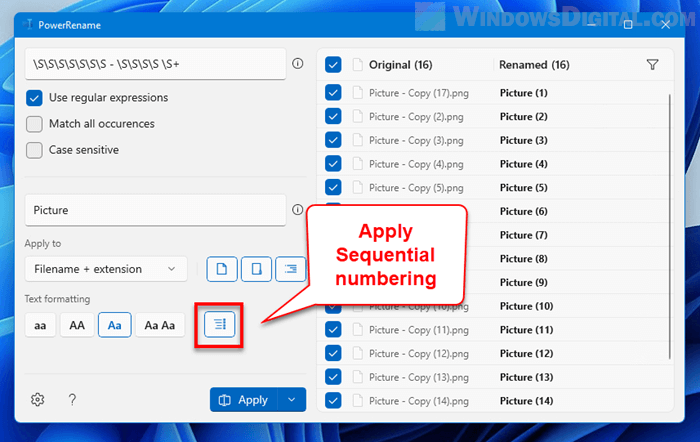 To rename files, folders, or subfolders, you may include or omit them.

When you right-click a parent folder and choose PowerRename, it will rename all of the files, folders, and subfolders therein. By allowing or disabling the choices next to the “Apply to” section, you may include or exclude files, folders, or subfolders (as shown in the screenshot below). 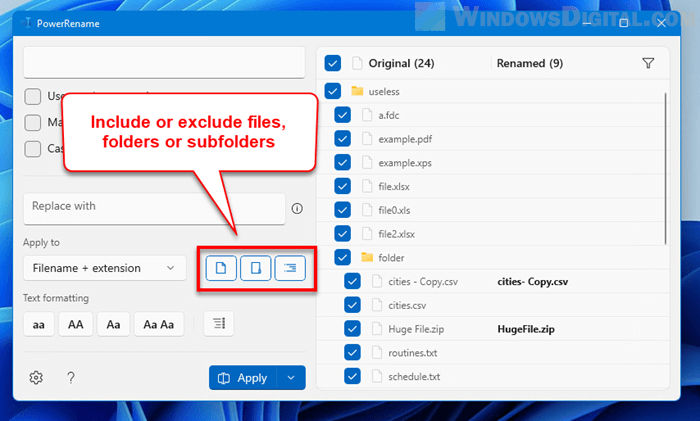 Each word should be renamed in uppercase, lowercase, or capitalized.

Select a text format from the Text formatting section to rename numerous files to a certain text formatting. All lowercase, all uppercase, Title case (first character only), and capitalize each word are the choices offered. 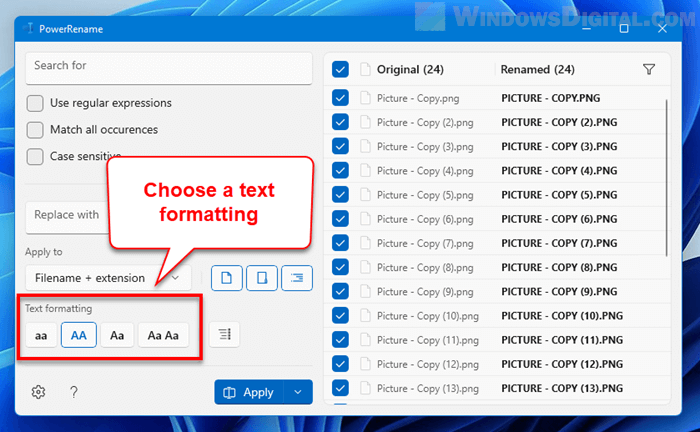 You don’t need to write anything in the search and replace section if you only want to rename the files to a specified text format. After you choose a text format, PowerRename will offer you a preview of the filename changes right away. To save your changes, click Apply.

Regular expressions should be used.

Regular expressions may help you narrow down your search and look for filenames that are more difficult. If you’re new to RegEx, hover your mouse over the exclamation point symbol next to the “Search for” area to learn about the many regular expressions available. Experiment with each regex to see what it can achieve. 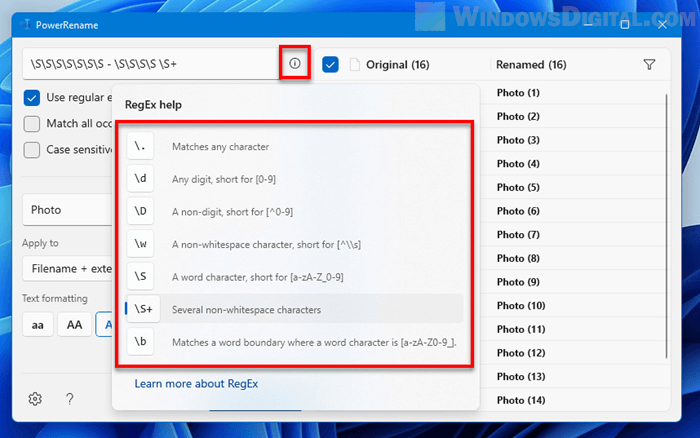 A tutorial on renaming several files at once in Windows 11, replacing or removing parts of filenames in bulk, changing file extensions in bulk, and more.

The “how to rename a file in windows 11” is a common task that many people need to do. In this tutorial, I will show you how to batch rename files using Windows.

How do I rename multiple files in Windows 11?

A: To rename multiple files in Windows 11, you can use the Rename utility. This is an application that comes pre-installed with Windows and allows users to easily change file names by right clicking on a selection of them and choosing Rename. The program should be found under your start menu or task bar.

How do I batch rename multiple files at once?

A: This is an advanced function and not for the faint of heart. If you have a lot of files that need renaming, then please send them to me!

Is there a way to rename a bunch of files at once?

A: Yes. If you have multiple files with the same name in a folder, then rename them all at once by opening up File Explorer and replacing the old names with new ones. Then use Rename Multiple Items to quickly replace many of your file names at one time.

Are Blue Switches Good for Gaming?